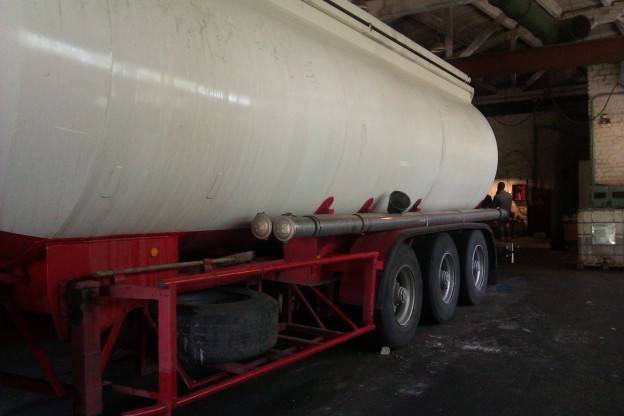 Bitumen is supplied to road construction companies mostly by oil refineries, located in large industrial centers, which can be located far from the areas of consumption. Bitumen production is seasonal and peaks in spring and summer.

All of the above leads to the need of transporting the binding over significant distances, stockpiling and storage and subsequent preparation for production of asphalt mix.

Bitumen in horizontal tanks can be not only stored, but also heated, using a coil heater, located inside the tank. Modern bitumen tank technology allow to adhere to the strict standards of bitumen and bitumen emulsion storage, as well as to simplify the control of the product thanks to automated systems and sensors tracking changes in the physical and chemical properties of bitumen.

When bitumen emulsion is in storage, water evaporates form the surface of the product and crust forms. This crust prevents further water evaporation. This fact makes storage of emulsion in vertical vessels preferable to horizontal, because when the level of emulsion changes, the crust does not change its geometry, unlike that in horizontal cylindrical tanks.

The internal surface of the tank must be treated against corrosion due to the slight chemical aggressiveness of bitumen emulsions.

The tank must also be insulated, equipped with electric heating with automatic temperature regulation and control with a sensor installed in the tank.

It should be noted that the most widely used method of bitumen heating is steam and electric heating, as well as bitumen boilers with heating tubes. The use of the above methods are in some cases not reasonable in terms of economic efficiency and quality.

To prevent, or at least to reduce bitumen aging, certain measures aimed at more gradual and mild heating of the binding material should be taken at the stage of preparation for asphalt mix production, including reduction of preparation time and minimizing exposure to air. These issues may be solved by improving heating, pumping and storage of bitumen.

Some of the reasons for bitumen aging, being subjective, may be eliminated technologically by rational design of transportation, storage and preparation equipment. Other reasons are objective and stem from the very nature of bitumen.

Bitumen transportation is strictly regulated by national rules and regulations. Storage and transportation types, filling methods, markings and safety are clearly defined. Approval depends on compliance of the transport and storage vessels to the regulations. The main land transports for bitumen are rail and truck tanks, canisters of various volumes, as well as metal or polymer barrels.

Bitumen produced by refineries can, in certain conditions, be stored at higher temperatures for significant time (5 days and more). This fact defines the flow of polymerization process, which is one of the aging factors, changing the chemical composition of the material. A weak point of this method of transportation is unloading of the supplied material. This process supposes heating and subsequent pumping to bitumen storage. The traditional technologies cannot prevent water and contaminants from entering the material. Unloading methods are, mostly, energy intensive.

The natural conclusion is that the currently widespread transportation of bitumen by railroad or trucks is by far not the most efficient. Transportation and storage facilities bear a cost. Some of the product cannot be unloaded and adds to the costs as well. A new approach is the use of 1 cubic meter cardboard containers. Bitumen is loaded into such containers by the refinery which are then transported to intermediate storage warehouse. Bitumen is shipped to customers as needed, the customers only have to unpack and heat the bitumen. All bitumen is easily recovered from the container, and the containers themselves are recycled. This method does not replace, but adds to the existing transportation infrastructure, eliminating only the unnecessary stages between the producer and the consumer.

Multiple bitumen heating cycles during loading and unloading, which cannot be avoided in “traditional” transportation, not only require consumption of additional energy, but also promote accelerated oxidation of the material with adverse effect on its quality. As a result, the use of bitumen which has been heated multiple times, reduces pavement durability from 4 – 5 to 2 – 3 years. The use of cardboard containers, however, allows to only melt bitumen once, immediately before production of the mix. This allows to fully preserve bitumen properties which has a direct positive effect on pavement, extending its lifetime, and therefore reducing road maintenance costs.